Well, we’ve mostly unpacked the stuff we trucked from Alberta to Toronto into Kristina’s new pad.

She’s in a great spot near Queen Street just west of University. She’s walking distance from the UofT, Chinatown, Kensington and just about everything else. It’s awesome.

After a morning of building Ikea stuff, Pat and I went on a long walk while Kristina met some friends.  Then we all got together with our friend Richard for a bite on Church Street. Last night was much the same except K and I ended the night having a couple of beers and listening to Jazz at The Rex.

There’s some more unpacking to do, but I’m now declaring the rest of the week vacation time. Some more live music, walks and a Jay’s game are in the cards. Maybe a drive south, too.

Here are some pics to cap off the odyssey. 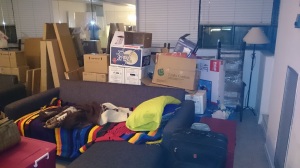