Kristina and I just chowed down in Ignace, ON. We drove 10 hours today to get here, starting in Shoal Lake, MB. We bedded down there instead of making it to Winnipeg.

Skies were looking kinda foreboding. It was getting dark. And there had been construction making it tough to tell where the road ended and the gravel began.

Turns out that was a good thing. Shortly after checking into our motel, it really started to pour and there was booming thunder and sky-piercing lightening. Then tornado warnings started showing up on the TV. Including for where we were.

We finally got to sleep around mindnight but were woken by another round of thunder and lightening.

The morning news told us that we missed a tornado that touched down by just an hour’s drive.

Today, after lunch in Steinbach, MB, we drove through the amazing lakes of southeastern Manitoba and through the Canadian Shield. I’ve never seen this country face to face before. Amazing. Unreal. I can’t believe I waited this long to make the drive.

I can’t get over how amazing the Manitoba lakes and the shield are. The Shield? It’s as awe inspiring as the Rocky Mountains in its way. Pretty high comment from me, being an Alberta boy raised within eyeshot of the Rockies.

We’ll be up early tomorrow to drive another 12 or so hours. More pics then. 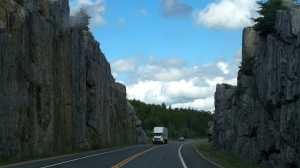 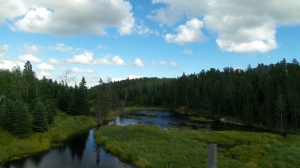