Smart as I am, when the signs on the stores we passed on our VIA Rail train were no longer written in English, I figured out they were in French. And that meant that we’d crossed the border between Ontario and Quebec.

Seeing Quebec roll by from the ground for the first time was tres bien. And entering Montreal on the train route was a complete different experience than driving in from Pierre Trudeau airport. Very cool.

We walk out of the VIA station, roller suitcase in tow just after noon. We found a patio on Phillips Square — Le Grand Comptoir — and fortified ourselves for the afternoon. We had a great, simple lunch under perfect patio weather, just shy of 30 C. The square out front and the slow traffic creeping past us provided perfect views for taking in the city. The only downside were the Canadian, German and Brit business dudes sitting next to us. They were all trying to impress each other with their biz smarts and used F bombs as verbs, nouns, adjectives and just about everything else. I’m not against a good Fbomb. I just appreciate variety and creativity in cursing. And I try to avoid the nastiest words in all-age public settings.

These boys were more amusing than disturbing though.

After eating, we headed towards Patricia and Kristina’s friend, Francois’s place. It was a great stroll, even with the bag in tow. He lives near Ste Catherines’. Which we strolled along much of the way. We also had a coffee on Ste Denis. It was great to sit there and restore my memories of Montreal.

We met Francois after he was done work and went for dinner at Le Steak House Du Village — a great choice for us Albertans. After a long meal on the patio combined with great people watching and conversation, I now count Francois as a friend. 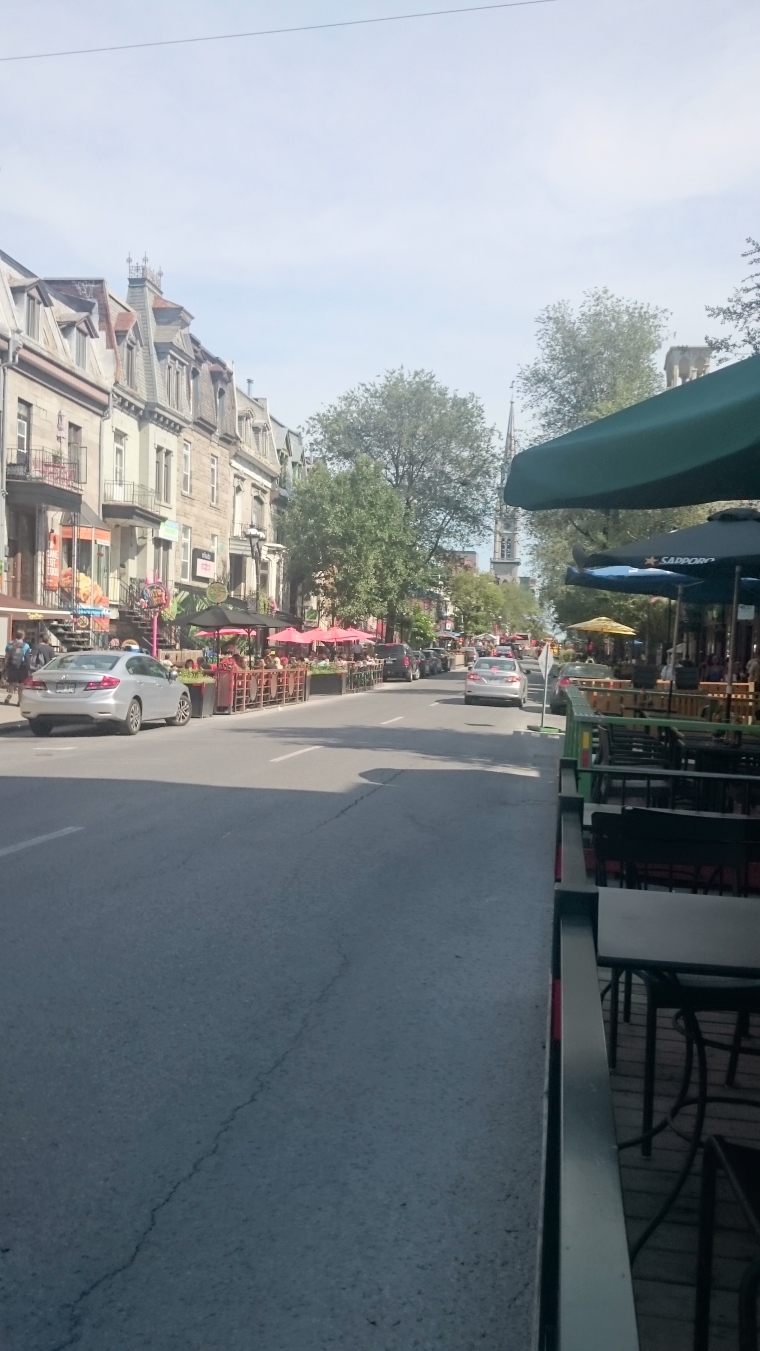 We took the train back to Toronto on Saturday. Dinner in Leslieville and then Saturday afternoon we watched the Blue Jays beat Minnesota, staying on top of the American League East pennant race. We watched the sun go down at Yonge and Dundas square.

Monday we paid a visit to BMV books and then strolled over to China Town and Kensington. I still can’t visit Kensington Market without humming the King of Kensington theme song to myself.

All of this brain food from TO and Montreal is nicely feeding my writing. I’m making good progress on the fiction stuff.